Excellent dinner with amazing service -- 5 stars across the board + we will definitely return!

Just want to point out how great our server was. Great guy.

We had an outstanding Father's Day family dining experience at Fogo de Chao. The service was top-notch and the food was on point. Special thanks and recognition to Event Manager Anastasia for working with us in advance of our arrival on the logistics. Also, major props to our server Jorge and gaucho Eddie for seeing to it that our needs were addressed from when we were seated to the time we departed. We are looking forward to celebrating our next family milestone with the Fogo de Chao team!

The food at Cholon was a combination of complexity and familiarity. The French onion soup dumplings put a huge smile on my face as I tasted the familiar flavors and textures from my favorite bistro, but they exploded in my mouth from an unassuming little pocket. The Brussel sprouts layered flavor upon flavor, each taking a turn as the star. The mushroom dumplings were both earthy and elegant. Finally, my wife said the lamb chops were among the best she's had. Even with all of that, however, the star was the chocolate pudding which ranked among the best desserts we've ever encountered... and we love a good dessert. We can only think of two we've had in the past couple of years that compare. The service was polite and attentive though nothing really stood out.The atmosphere was lovely.

Third visit to this **restaurant** and each time there no disappointments. Service was very good, personable waitress, great food, vibrant amosphere.

The only **restaurant** in Denver we’ll make the drive for! We live an hour away and Tupelo Honey is THAT GOOD. The service is super nice, the biscuits are amazing and our brunch has always been equally delicious.

One of the most amazing meals we’ve ever had! Sasha made us feel very welcomed and provided a detailed run down of the menu. Her recommendations were spot on. We left feeling completely satisfied. Not bloated or overly full but healthy and happy. Steak flight is a must!

Our waiter was beyond delightful and helpful! We all had a marvelous time and ate very well! The **restaurant** was beautiful and fit the overall theme to a tee!

Water Grill is fantastic! The atmosphere is great! The food and service is superb! Highly recommend. 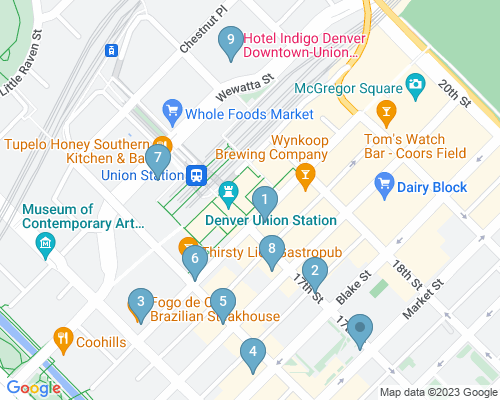